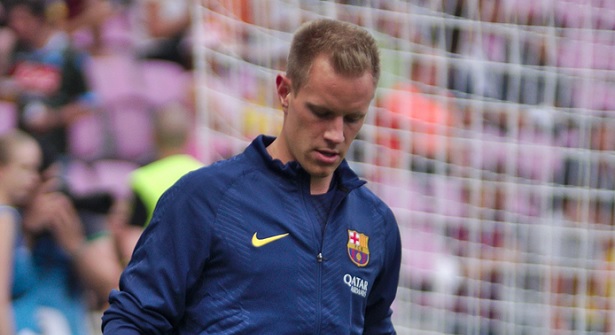 At top clubs like Barcelona competition for places is always fierce. In order to compete at the highest level, Europe’s premier teams have to stack their squads full of talent and that means that top class players can often find themselves outside of the first eleven.

What is perhaps not quite so common, however, is for there to be as fierce a competition for the goalkeeper’s number one jersey as there appears to be at the Nou Camp this season. Ahead of the 2016/17 campaign, the trio of Marc-André ter Stegen, Claudio Bravo and Jordi Masip have designs on that prestigious position, and strong cases can be made for at least two of the three.

German goalkeeper ter Stegen joined Barcelona for a transfer fee of €12 million after the departure of long-time number one Victor Valdes in 2014. Seen by many as a natural successor to Valdes, an injury in the lead up to the 2014/15 campaign greatly damaged ter Stegen’s chances of making the number one jersey his own.

During his first season at Barca, in fact, ter Stegen made no La Liga appearances and was instead earmarked as the club’s cup and European keeper. In that role, the German helped Barca to both the Copa del Rey and Champions League crowns during the campaign but was still only rewarded with seven league appearances the following year.

At the age of just 24, ter Stegen certainly still has plenty of years at the top of the game ahead of him, but the German appears to believe that it should be his time now. Speaking in March of this year, he made his opinion of Barca’s goalkeeping rotation policy abundantly clear:

‘In the long run, these 25 games per season are not enough for me…I hope that the quality I’ve seen recently is rewarded.’

Chilean goalkeeper Claudio Bravo also joined Barcelona in 2014 and was similarly signed for a fee of €12 million. It was he who benefitted from ter Stegen’s early injury by being handed the number one jersey in La Liga and the Chilean certainly took advantage of the opportunity.

Playing in 37 of Barca’s 38 league games in 2014/15, Bravo conceded only 19 goals through the whole campaign and won the prestigious Zamora trophy for the league’s most effective keeper. That saw Bravo stay between the sticks for much of Barca’s 2015/16 La Liga campaign but he was once again rested for the Copa del Rey and in Europe.

Nine years ter Stegen’s senior, Bravo himself is also far from content with sharing the goalkeeping load for Barcelona and in November 2015 explained that:

‘If I were to say that I’m taking it well, I would be lying, but I accept it.’

Hugely unfortunate to have made his step up from Barcelona B to the first team at the same time as the club purchased both ter Stegen and Bravo, Masip is a 27 year old Spanish keeper.

As a product of the club’s own academy, Barca are not likely to prioritise him over either of their big money signings and Masip has only enjoyed four total appearances in the past two seasons. Quite possibly talented enough to be a number one in his own right, the Spaniard may have to move elsewhere if he is to get more regular first team football.

As harsh as it is to say, it is fairly obvious to conclude that Jordi Masip will not be Barca’s number one this season. As for the battle between ter Stegen and Bravo, meanwhile, things are far less certain.

Both keepers are obviously far from content with sharing the load between them but neither has definitively claimed the jersey for themselves through their performances. By dint of his youth, however, it might just be the 24 year old German who ultimately comes out on top and sees off the challenge of his Chilean rival.