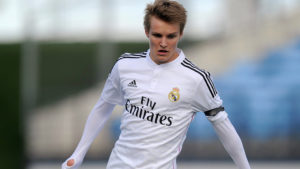 Real Madrid starlet Martin Odegaard could be coming to the Premier League, with West Ham United trying to tie up a loan deal for the wonderkid.

According to a report by Spanish newspaper AS, Odegaard’s future could be wrapped up in the coming days as Madrid want a move to be completed ahead of their transfer ban beginning.

The 17-year-old, who is also a target for Bayer Leverkusen and Hamburg, have appealed against the ban with a ruling expected to be confirmed by the end of the week.

If the ban is upheld Real Madrid will be unable to register outgoing or incoming players, meaning Odegaard would be stuck at the club for 12 months even though he does not feature in Zinedine Zidane’s plans.

Zidane left the talented teenager out of his squad for the Super Cup win against fellow La Liga side Sevilla this week, with West Ham keen to take Odegaard on a season-long loan deal.