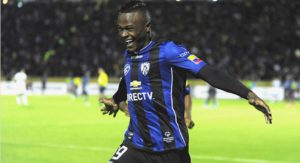 Stoke City’s search for a new striker has been dealt a blow with one of their targets reportedly set to sign for a La Liga club.

The Potters are looking for a new striker to lead the line in the Premier League this season, with Mark Hughes having been linked with a move for Independiente del Valle forward Jose Angulo, whose goals recently fired the club to the Copa Libertadores final.

Angulo’s agent Matias Lipman told the Guardian last month: “So far Stoke and Monaco have shown an interest but I’m sure when the Copa Libertadores final game is played there will be other Premier League clubs involved.”

However, it seems as though the Ecuadorian could be on the move to La Liga imminently, with Granada on the cusp of signing the striker.

According to Marca sources, a deal in the region of 4 million euros is set to be completed for 21-year-old Angulo, who was also a target for Sevilla and Atletico Madrid.