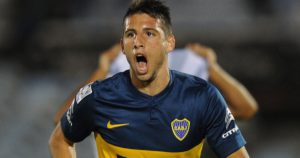 Argentine striker Jonathan Calleri was expected to join West Ham United on loan after the Olympic Games, but La Liga champions Barcelona are reportedly planning to hijack the move.

Calleri, who scored Argentina’s winner against Algeria at the Games at the weekend, is a Boca Juniors player but spent last season on loan at Sao Paulo.

According to a report by Catalan newspaper Mundo Deportivo, Calleri is one of a number of attackers Barcelona are considering bringing to Camp Nou to boost their forward line.

While the fabled MSN strikeforce of Lionel Messi, Neymar and Luis Suarez is arguably the most fearsome attacking trio in the world, coach Luis Enrique does not have a lot of depth in his forward options.

Mundo Deportivo say the situation with Calleri is “mysterious” as West Ham have not announced the signing despite the player himself confirming the deal.

“The deal is done. It is sure that I am going to play at West Ham,” Calleri told ESPN recently, adding he would speak to former Hammers forward Carlos Tevez about the club.

“All that is left to finish is the work visa and if there are no other problems, if all goes well, I will be playing there. Playing in Europe has always been my dream.”