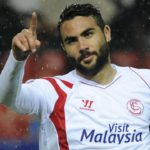 According to reports from the Sun, Premier League outfit Crystal Palace are close to securing the services of Sevilla midfielder Vicente Iborra. Crystal Palace are on a terrible run of form in the Premier League at the moment and at this rate, relegation looks a very distinct possibility for the Eagles. Nonetheless, Palace do possess a very experienced manager in the form of Sam Allardyce and the 62-year-old is said to be hopeful of bringing in a number of players to Selhurst Park during the current January transfer window in order to boost his side’s chances of avoiding the … END_OF_DOCUMENT_TOKEN_TO_BE_REPLACED

Premier League side Watford are eyeing up a swoop for Sevilla star Vicente Iborra, according to reports from WDSport. Watford made a wonderful start to the campaign under new manager Walter Mazzarri but the Hornets have struggled in recent times and currently find themselves in a terrible run of six defeats in their last eight Premier League matches. In order to address the slide, Mazzarri is widely expected to be strengthening his squad during the current January transfer window and now according to reports from WDSport, claims have been made that the Italian boss is considering a move … END_OF_DOCUMENT_TOKEN_TO_BE_REPLACED