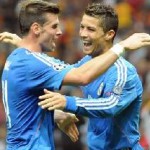 It was Real Madrid 3 Barcelona 0 today as UEFA announced their official team of the year for 2013. The dream team is voted for by ordinary football fans through social media and via the UEFA website, but they failed a recognise a single Barcelona player, despite their runaway success in La Liga last year. There was another snub for Lionel Messi, who finished 13th in the votes, after losing out to Cristiano Ronaldo for the Ballon d'Or on Tuesday. Even with his injury problems it seems absurd to leave him out of a European league 11. Ronaldo himself made, the squad, of course and it marked the … END_OF_DOCUMENT_TOKEN_TO_BE_REPLACED