On the 3rd of April, 1904, the Málaga Football Club was formed. 109 years later to the day, the latest incarnation of football in the city, Málaga Club de Fútbol will take to the Rosaleda pitch in the biggest match of the clubs history. The name has changed over those 109 years as have the owners, but never has such success been witnessed in the city and many still believe it is all a dream. The journey began on a warm August evening with a final qualifying round tie against Panathinaikos of Greece to decide who would play in the competition proper. Panathinaikos are an historic name in … END_OF_DOCUMENT_TOKEN_TO_BE_REPLACED

Radamel Falcao started the Spanish season in spectacular goalscoring fashion for Atlético Madrid and was the centre of much transfer speculation.  He was initially linked with a move to cross town rivals Real Madrid and even a big money move to Paris Saint-Germain. Recently, however, stories have emerged of a possible switch to the English Premiership and particularly with a move to current European Champions Chelsea, a side he scored a hat-trick against in the European Super Cup Final in Monaco, catching the eye of owner Roman Abramovich. … END_OF_DOCUMENT_TOKEN_TO_BE_REPLACED

Málaga C.F. face F.C. Porto at the Rosaleda in tonight's return leg of their last 16 clash in the Champions League having never been defeated at their home stadium in European competition. This is the clubs second European adventure and they will hope the legend of la Rosaleda will continue against the Portuguese giants. … END_OF_DOCUMENT_TOKEN_TO_BE_REPLACED

The future of Málaga CF will be decided on Greek soil, when the Spanish hopefuls play Panathinaikos in the second leg of their UEFA Champions League playoff. The clubs were drawn together at UEFA’s headquarters in Nyon on Friday, and the last week of August is now a do-or-die period for Málaga. With financial troubles rife at the cash-strapped club, progression to Europe’s elite club competition may be the only way to stop them plummeting down La Liga this season. … END_OF_DOCUMENT_TOKEN_TO_BE_REPLACED 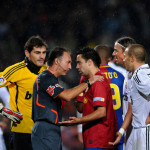 Okay. It took Revista de La Liga just thirty minutes on Tuesday to mention a topic that has very much become the elephant in the room of Spanish football recently - the domination of Barcelona and Real Madrid and the ever-growing gap between them and their fellow La Liga competitors in terms of finance, performance and control. … END_OF_DOCUMENT_TOKEN_TO_BE_REPLACED

Malaga CF diehards up and down the Andalucian coast-line were rip-roaring in celebration last week following the news of the high-profile signing of Dutch international Ruud van Nistelrooy. The ex Real Madrid and Manchester United star's capture will go down as owner Sheikh Al-Thani's first notable signing since his acquisition of the club in 2010 and with a myriad of big-name signings no doubt on their way to La Rosaleda this summer, Malaga are poised to challenge at the very top of La Liga in their second season under their new ownership. … END_OF_DOCUMENT_TOKEN_TO_BE_REPLACED