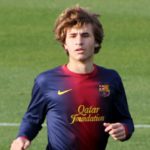 Speaking to the London Evening Standard, Barcelona youngster Sergi Samper has revealed that he rejected the advances of Arsenal manager Arsene Wenger last season. Sergi Samper is an extremely talented young player but considering the plethora of star players ahead of him in the pecking order at Barcelona, it was widely believed that the midfielder would have to leave the Nou Camp in order to earn regular first team football. A number of clubs were indeed interested in securing the services of Samper and reports had claimed that Premier League giants Arsenal had managed to agree a £8.5 … END_OF_DOCUMENT_TOKEN_TO_BE_REPLACED 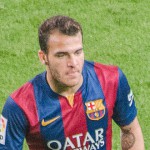 Barcelona have placed a meagre £4.4million price tag on Arsenal target Sergi Samper, according to reports from the Express. Sergi Samper is considered as one of the finest midfield players to have emerged from the famed Barcelona academy in recent times but the youngster has struggled to earn regular minutes on the pitch at the Nou Camp due to the presence of a host of stars ahead of him in the pecking order in the first team. As a result, it has been widely claimed that Samper will be looking to leave Barcelona permanently in his search of regular minutes on the pitch and reports emerging … END_OF_DOCUMENT_TOKEN_TO_BE_REPLACED 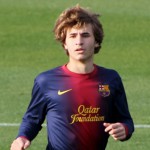 Premier League giants Arsenal are considering a £8.5million January swoop for Barcelona youngster Sergi Samper, according to reports from Shoot. Arsenal certainly find themselves in the Premier League title race this season and in order to boost their chances of claiming the crown, it is widely expected that the Gunners will look to make a couple of big name signings during the January transfer window. However, this does not mean that Arsenal manager Arsene Wenger has turned a blind eye on building for the future and the well known advocate of promoting young talent has now been touted to … END_OF_DOCUMENT_TOKEN_TO_BE_REPLACED