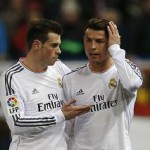 Atletico Madrid were today handed a €600 fine after Cristiano Ronaldo was struck on the head by a cigarette lighter as he walked off the Vicente Calderon pitch on Tuesday. The incident happened as the teams walked off at half time in their Copa Del Rey semi-final. It was a tempestuous atmosphere. Atletico were being humbled by their biggest rivals, and the always lively Atleti crowd were in no mood to contain their anger. Ronaldo, as always, was the target of the fans abuse. This time, it went much too far. RFEF explained the paltry nature of the fine by saying that it had been an isolated … END_OF_DOCUMENT_TOKEN_TO_BE_REPLACED