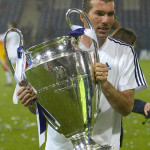 In football terms, few would argue that the 21st century has so far belonged to Spain. The national side has risen from the ranks of perennial under-achievers to become undeniably the dominant force in the international game, winning the European Championship and World Cup tournaments in succession. European football fans have drooled over the sublime technical skills of Spanish clubs featuring stellar line-ups of home-grown talent mixed with modern greats of the game. Catalan giants FC Barcelona developed a side which has not only won every possible major honour in club football, but they've … END_OF_DOCUMENT_TOKEN_TO_BE_REPLACED