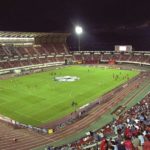 Barcelona, Real Madrid, Atletico Madrid. Three of Spain’s biggest clubs and three sides that need no introduction. However, there are seventeen other sides who will compete in La Liga next season who are perhaps less well known to European football fans. So, with that in mind, we thought it a good time to dig a little deeper into La Liga’s latest edition RCD Mallorca. The History Founded in 1916, the club based in the city of Palma on the island of Mallorca have had plenty of ups in their history but also some serious downs. Initially they were known as Alfonso XIII Football … END_OF_DOCUMENT_TOKEN_TO_BE_REPLACED