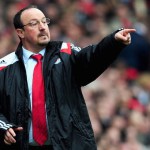 Rafael Benitez's tenure as Inter Milan manager has come to a swift end as he this evening has been sacked club president Massimo Moratti at the Italian club. Despite recently being crowned World Club Cup champions, a series of poor results has left the treble winners in serious trouble sitting 7th in the Serie A league table, 13 points adrift of rivals AC Milan. Spanish media sources had already speculated that Benitez, 50, was well aware of his imminent sacking and has been holding out for his dismal in order to make sure he receives a huge pay-off. The former Liverpool coach is currently … END_OF_DOCUMENT_TOKEN_TO_BE_REPLACED