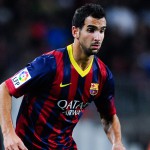 Everton are set to rival Liverpool to capture Barcelona's wantaway defender Martin Montonya, with the youngster expected to be sold in the upcoming transfer window. Montoya only signed a 5-year contract in the summer, but Spanish media are reporting that the 23-year-old will be sold, having failed to make an impression under Luis Enrique. The right-back has played just once this season, which was a start against Athletic Bilbao in early September, and has reportedly been told he can leave the Nou Camp. Liverpool had been seen as favourites to capture Montoya, but Everton have come into the … END_OF_DOCUMENT_TOKEN_TO_BE_REPLACED 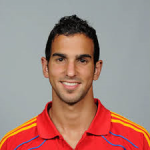 Liverpool have made the first move to sign Barcelona defender Martin Montoya after the Reds opened talks with the Nou Camp youngster. Montoya is out of contract in the summer and Barcelona look ready to offload the La Masia graduate in January. Talks have been ongoing between Montoya and Barcelona with the 22-year-old keen on staying at the club but Liverpool Managing Director Ian Ayre has flown out to discuss a potential fee. … END_OF_DOCUMENT_TOKEN_TO_BE_REPLACED

La Liga - many of you watch it, many of you don't. But whether you like the football in Spain's top division or not, the players that make their money in Spain are incredible to watch. What impresses me more is the rate at which La Liga is churning out brilliant youngsters. The academies of these clubs and the various 'B' teams in lower leagues really seem to be helping the youngsters along the line. Even taking in loanees, they help advance them incredibly. … END_OF_DOCUMENT_TOKEN_TO_BE_REPLACED