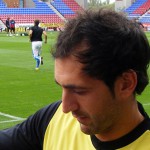 Soon after the capture of Marko Grujic, Liverpool are planning another January swoop in the form of AC Milan goalkeeper Diego Lopez - according to reports from the ITA Sport Press. Despite stating that he would not look to sign any new players during the January transfer window, Liverpool boss Jurgen Klopp has already gone on to make a new acquisition in the form of Serbian youngster Marko Grujic. Grujic is surely not set to be the only January arrival to Liverpool though and it has now been revealed by ITA Sport Press that Klopp is looking to strengthen his backline as well with the signing … END_OF_DOCUMENT_TOKEN_TO_BE_REPLACED