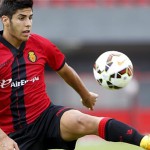 Real Madrid have confirmed the signing of exciting young winger Marco Asensio from Real Mallorca for an undisclosed fee. The European champions announced details of the signing on their official website, including a six-year deal for the player and the news the 18-year-old will remain with Mallorca for the remainder of the current campaign. Asensio has long been expected to complete a move to Los Blancos, but wrangling over various details scuppered a deal going through earlier in the week, per Marca’s Paco Munoz. According to InsideSpanishFootball.com, Barcelona were also very interested in … END_OF_DOCUMENT_TOKEN_TO_BE_REPLACED