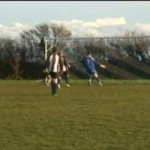 A village football team, after losing 11 games on the trot and conceded a staggering 227 goals, has been branded the worst football team in Britain. Hopeless Madron FC have suffered a disappointing start to the season and let in 227 goals since the start of the campaign having scored just two goals themselves and also being on the end of a 55-0 thrashing. Stand-in manager Alan Davenport has reluctantly admitted Madron FC are "probably the worst team in Britain" after their terrible run of results but still found time to praise his players for at least 'turning up.' See the boys in … END_OF_DOCUMENT_TOKEN_TO_BE_REPLACED