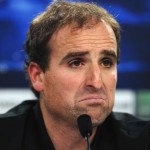 Real Sociedad will sack manager Jagoba Arrasate this week after the side continued their awful start to the new season. Former Mainz boss Thomas Tuchel is the favourite to take over at the Anoeta, with ex-West Brom and Real Betis manager Pepe Mel also in contention. The news comes following Sociedad's weekend draw with Cordoba as La Real conceded a late equaliser to draw 1-1 with the newly promoted side. With that result, Sociedad extended their winless run to seven games and dropped down to 17th place, yet to win since their 4-2 victory over Real Madrid. Arrasate, who took on the role of … END_OF_DOCUMENT_TOKEN_TO_BE_REPLACED