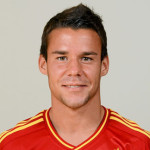 Bayern Munich have completed the signing of highly-rated Valencia full-back Juan Bernat on a five-year deal. Bernat, 21, joins Pep Guardiola's side for an undisclosed fee, believed to be around €10m, after an impressive season with Los Che in 2013/14. The Spanish Under 21 starlet made 49 appearances for Valencia last season having come up through their academy system, as they made it to the semi-finals of the Europa League. He now joins compatriots Thiago Alcantara and Javi Martinez in Bayern's multi-talented and multi-cultural squad. Bernat only switched to full-back in 2013 but has since … END_OF_DOCUMENT_TOKEN_TO_BE_REPLACED