As quoted by the Daily Mirror, Middlesbrough manager Aitor Karanka has confirmed that he is interested in securing the services of Paris Saint-Germain attacker Jese Rodriguez this month. Jese Rodriguez made a big money move to Paris Saint-Germain from Real Madrid this summer and many felt that the Spaniard would prove to be a good signing for the French champions. Surprisingly though, Jese has been limited to very little playing time at the Parc des Princes and it is clear to see that the 23-year-old is well down the pecking order under manager Unai Emery. Due to the lack of minutes … END_OF_DOCUMENT_TOKEN_TO_BE_REPLACED

According to reports from Italian outlet Transfer Market Web, Premier League outfit Middlesbrough have moved ahead of Liverpool in the race to secure the services of Jese Rodriguez. Jese Rodriguez made a big money move from Real Madrid to Paris-Saint Germain over the summer but it has to be said that the transfer has not worked out for the young Spanish attacker. Jese has been limited to only 368 minutes of action on the pitch in all competitions so far this season and it is clear to see that the 23-year-old currently finds himself well down the pecking order at the Parc des Princes … END_OF_DOCUMENT_TOKEN_TO_BE_REPLACED

Premier League outfit Middlesbrough have joined Roma in the race to secure the services of Paris Saint-Germain attacker Jese Rodriguez, according to reports from Calcio Mercato. Rodriguez joined Paris Saint-Germain from Real Madrid at the start of last season for a fee believed to be in the region of around £21.6 million and it was expected that the Spaniard would be able to make a positive impact for the French champions. However, Jese has been limited to very little playing time on the pitch so far this season and as a result, the 23-year-old has been touted to make a swift exit from … END_OF_DOCUMENT_TOKEN_TO_BE_REPLACED

According to reports from the Daily Star, West Ham United are looking to secure the services of Paris Saint-Germain man Jese Rodriguez during the upcoming January transfer window. West Ham United have endured a terrible campaign so far and one of the main problems plaguing the Hammers at the moment is their inability to find the back of the net on a consistent basis. West Ham have scored only 15 goals in 14 Premier League matches so far and with flop Simone Zaza expected to be leaving soon, the struggling London side will surely have to strengthen their attack during the upcoming January … END_OF_DOCUMENT_TOKEN_TO_BE_REPLACED 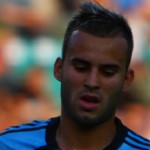 Former Liverpool star Danny Murphy has urged Liverpool to secure the services of Real Madrid striker Jese Rodriguez. Liverpool are expected to be very busy in the January transfer window and signing a new striker remains high on the priority list for manager Jurgen Klopp. A host of top names such as Robert Lewandowski, Pierre Emerick-Aubameyang and Javier Hernandez have been linked with a move to Liverpool over the past few weeks. Rather than going for such high profile players though, former Liverpool star Danny Murphy wants the Reds to pursue a more modest target in the form of Real … END_OF_DOCUMENT_TOKEN_TO_BE_REPLACED

Liverpool are eyeing a move for Real Madrid youngster Jese Rodriguez, according to reports from Don Balon. Liverpool are expected to be very busy in the transfer market in January and a host of players have already started being linked with a move to Anfield. Due to the injuries to the likes of Martin Skrtel and Dejan Lovren, Liverpool manager Jurgen Klopp is on the lookout to sign a new central defender. Given Liverpool’s lack of goals this season, strengthening the attack will also be a priority for the Reds and now according to reports from Don Balon, it has been claimed that the Reds … END_OF_DOCUMENT_TOKEN_TO_BE_REPLACED