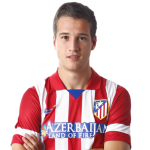 Liverpool have completed a deal to sign full-back Javier Manquillo on loan for two seasons. The Spanish youth international joins from Spanish champions Atletico Madrid, and will remain at Anfield until 2016. The Reds have fought off competition from Arsenal, who were thought to be interested in Manquillo, before signing Callum Chambers from Southampton. It now means Brendan Rodgers has taken his tally of summer signings to seven, and could bring in yet more ahead of their return to the Champions League. The club has welcomed Rickie Lambert, Adam Lallana, Dejan Lovren, Emre Can, Lazar … END_OF_DOCUMENT_TOKEN_TO_BE_REPLACED