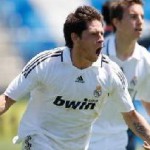 As always in early January there are lots of transfer rumours but little firm action. I have it on very good authority that at least one big name player will be joining an English Premier League club next week – be sure to read www.laligablog.com every day for the confirmation. In the meantime we can reveal a done deal – Javier Acuna has joined Osasuna on loan from Watford. Acuna is a 25 year old Paraguayan who has represented his country at under-20 level. He can pay either as a conventional centre forward or as a winger and has notched 33 goals in 148 career appearances. Acuna … END_OF_DOCUMENT_TOKEN_TO_BE_REPLACED