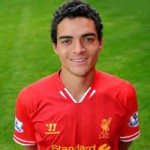 Liverpool's young Portuguese defender Tiago Ilori is being linked with a transfer window move to La Liga with Granada. I understand that the move will initially be a loan until the end of the season with the option to make this permanent before the start of the next season. Ilori had been talked of as one for the future at Anfield, when Brendan Rodgers signed him at the beginning of the 2013-14 season for a fee of £7M. He has composure on the ball and likes to play the ball from the back rather than looking for the long ball forward. With Jamie Carragher having retired from the game, it had … END_OF_DOCUMENT_TOKEN_TO_BE_REPLACED