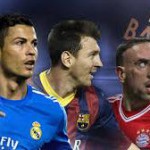 The two greatest players in Spanish football, Cristiano Ronaldo and Lionel Messi, go head to head tonight to see who will be crowned the greatest player in the world. It's an El Clasico being held in Zurich. The Ballon d'Or (or golden ball) is given to the player who has been the world's best player during the previous calendar year. Ronaldo was distraught at missing out to his arch rival Lionel Messi last year, but could this be the year that he snatches it back? La Liga blog assesses the contenders. Ronaldo is the heart beat of the Real Madrid side. He is a formidable striker of the ball, … END_OF_DOCUMENT_TOKEN_TO_BE_REPLACED