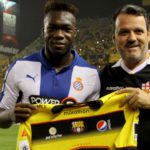 As reported by the Birmingham Mail, Premier League outfit West Bromwich Albion are considering a shock swoop for Espanyol Felipe Caicedo. West Bromwich Albion have enjoyed a wonderful season so far and following the fine 2-0 victory over Sunderland during the weekend, the Baggies have moved into 8th position in the Premier League table. On current form, West Brom most certainly look like they stand a very good chance of earning a European placed finish this season but the competition remains fiercer than ever and the Baggies will surely be aided in their lofty aspirations by making a … END_OF_DOCUMENT_TOKEN_TO_BE_REPLACED

Continuing the round-up of players to watch this season, we now feature a couple of players looking to impress whilst on loan, and three clubs having come up from the Segunda.  Cordoba An astonishing piece of business was done to bring Valencia starlet Fede Cartabia to the newly promoted club during the close season. The 21-year-old Argentine was tipped to have a better season for Los Che in 2014/15 after fans expected more from the youngster in his debut campaign. However, the bewildering decision to let the youngster continue his development in a team widely tipped to struggle this season … END_OF_DOCUMENT_TOKEN_TO_BE_REPLACED