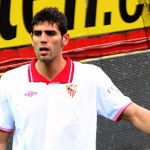 Tottenham Hotspur have been informed by Sevilla that they will only sign Federico Fazio on a permanent deal if they earn qualification into the Champions League, as revealed by reports. Federico Fazio has been a huge flop since his move to Tottenham Hotspur at the start of last season and Spurs are desperate to get rid of the defender during the current January transfer window. A move back to Sevilla had been touted for Fazio but a transfer has not come into fruition as of yet and Tottenham remain locked in negotiations with the Spanish side over the departure of the Argentine … END_OF_DOCUMENT_TOKEN_TO_BE_REPLACED

Chief Executive Jose Castro has revealed that Sevilla have established contact with Tottenham Hotspur over the transfer of Federico Fazio. Having struggled for regular minutes on the pitch this season, Federico Fazio was widely tipped to be leaving Tottenham Hotspur during the January transfer window and a move back to Sevilla had been touted for the Argentine defender. The transfer has surprisingly not come into fruition as of yet though and Tottenham are desperate to complete the deal as soon as possible as the January transfer window is set to slam shut within the next few days. Now … END_OF_DOCUMENT_TOKEN_TO_BE_REPLACED

Premier League side Tottenham Hotspur are on the verge of sanctioning the departure of flop defender Federico Fazio back to Sevilla, according to reports from the Daily Mirror. Fazio has proven to be a huge flop since his £8million move to Tottenham Hotspur from Sevilla at the start of last season and the defender has failed to make a single appearance in the Premier League so far during the current campaign. As a result, it was widely touted that Fazio would be leaving White Hart Lane during the January transfer window and now according to reports from the Daily Mirror, Spurs are now on the … END_OF_DOCUMENT_TOKEN_TO_BE_REPLACED

Sevilla president Jose Castro has confirmed that he is working in the process of facilitating the return of Tottenham Hotspur defender Federico Fazio to the Ramón Sánchez Pizjuán in January. Fazio joined Tottenham Hotspur from Sevilla at the start of last season and a lot was expected from the Argentine international at White Hart Lane. However, Fazio has failed to impress and is now clearly down the pecking order under manager Mauricio Pochettino, as evidenced by the fact that he has been limited to only one League Cup appearance so far this season. As a result, it is widely expected that … END_OF_DOCUMENT_TOKEN_TO_BE_REPLACED