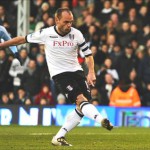 Fulham fired themselves into the FA Cup fifth round with a convincing 4-0 rout over a 10-man Tottenham Hotspur. It took only until the 11th-minute for the hosts to take the lead as Danny Murphy calmed converted from a  penalty, awarded for Alan Hutton's foul on Clint Dempsey. Murphy made it 2-0 three minutes later with a second spot-kick and things went from bad to worse for Tottenham as Michael Dawson saw red for a mis-timed challenge on Clint Dempsey. Further goals from Brede Hangeland and Moussa Dembele rounded off a memorable afternoon for the Cottagers and they will face either Bolton … END_OF_DOCUMENT_TOKEN_TO_BE_REPLACED