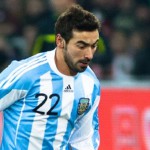 Tottenham Hotspur are in pole position to secure the services of Paris Saint-Germain striker Ezequiel Lavezzi, according to reports from talkSPORT. Lavezzi is widely expected to be leaving Paris Saint-Germain during the January transfer window and the likes of Barcelona and Inter Milan have been mentioned as suitors for the Argentine international by the media. Recently even Premier League side Tottenham Hotspur were said to have joined in the race to sign Lavezzi and now according to reports from talkSPORT, it has been claimed that Spurs are in pole position ahead of Barcelona to secure the … END_OF_DOCUMENT_TOKEN_TO_BE_REPLACED