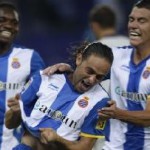 Espanyol were reduced to ten men, but still managed a 1-0 victory over Granada at the Cornella-El Prat stadium last night. Espanyol are an enigmatic team this season. Their defence is solid, but they just don't score enough goals. In an unusually tight Primera Division, they must have been looking over their shoulders. Friday's three points lifts them up to 8th place. Javier Aguirre will be sleeping sounder at night from now on. Things didn't start well for the Barcelona side. Defender Victor Alvarez was dismissed after half an hour for a reckless challenge on Granada striker El-Arabi. … END_OF_DOCUMENT_TOKEN_TO_BE_REPLACED