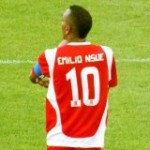 He was once the golden boy of Mallorca's youth system but in the four years following his introduction into the first team, Emilio Nsue has failed to live up to the extreme potential forecast as a youngster representing the Spanish youth teams. As a striker Nsue had pace and skills to dazzle opposing defenders and an early goalscoring record that suggested a bright future at the head of Mallorca's formation, but his progression failed to materialise in the way many expected. Since making his international debut however, Nsue has produced signs of his early career with four strikes in his last … END_OF_DOCUMENT_TOKEN_TO_BE_REPLACED

Over the past season Mallorca have enjoyed a swift turnaround in their fortunes. Carrying on from the narrow escape in 2011 when new Swansea manager Michael Laudrup managed to keep the club in the Primera Liga by the smallest of margins, Mallorca seemed to have ridden their luck too far in the early stages of the next season. Form dwindled and backroom staff squabbled during a turbulent time on the usually relaxing Balearic Island. As a result of poor financial health, a problem plaguing many Spanish sides over the past five years, Mallorca were not granted a licence to … END_OF_DOCUMENT_TOKEN_TO_BE_REPLACED