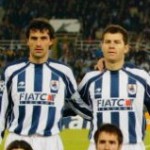 Real Sociedad have been improving of late with three wins from their last four games but have been rocked by allegations of match-fixing and doping. The team from the Basque Country currently occupy 8th position but have come under close scrutiny of late following an interview with the club's former President Inaki Badiola in Spanish newspaper AS last Monday. Badiola, President at La Anoeta for a 12 month spell in 2008, suggested that Sociedad players had used 'illegal medicine bought with dirty money from the black market' in a spell under former President Jose Luis Astiazaran, current head … END_OF_DOCUMENT_TOKEN_TO_BE_REPLACED