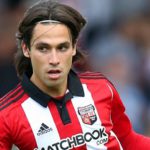 Brentford boss Dean Smith has stated that he is currently looking at the possibility of bringing back Jota to England during the January transfer window. Jota enjoyed a fantastic debut campaign with Brentford after joining the club back in the summer of 2014 but a serious knee injury meant that the Spaniard missed a lot of action last season. Surprisingly, Jota was allowed to move back to former club Eibar on loan during the January transfer window earlier this year and the deal lasts till the end of the current campaign. However, the 25-year-old has struggled for regular minutes on … END_OF_DOCUMENT_TOKEN_TO_BE_REPLACED