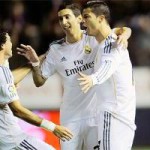 It's been a remarkable week for Cristiano Ronaldo, he has won his second Ballon D'Or, been named in the UEFA team of the year (at the expense of Lionel Messi), and last night he scored one of the goals that sent Real Madrid into the Copa Del Rey round of eight. But it seems that not everybody is feeling the love for CR7. Ronaldo had been the red hot favourite to win the Ballon D'Or, despite facing stiff opposition from Messi and Franck Ribery, and footballers from across the globe rushed to offer their support for him on the social networks. Former tem-mate Rio Ferdinand tweeted that he would … END_OF_DOCUMENT_TOKEN_TO_BE_REPLACED