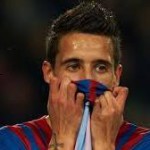 Barcelona forward Cristian Tello finds himself in a transfer window tug of war, with both Liverpool and Arsenal battling to secure his services. The tall, wiry 22 year old has been a peripheral figure in the Barcelona side and may have to leave to gain more first team football. Arsenal boss Wenger has said that he isn't in the market for a player this January, but is he playing a canny game and keeping his hand hidden? Liverpool are also in the market for an attacker. They have little back up to Suarez and Sturridge, and see Tello as a player with more promise than Aspas and Victor Moses. He … END_OF_DOCUMENT_TOKEN_TO_BE_REPLACED