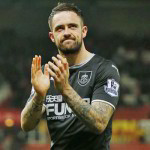 Burnley manager Sean Dyche has spoken out about striker Danny Ings' recent trip to Sociedad ahead of a proposed transfer. The Clarets boss said that Ings is enjoying his football at Turf Moor and remains fully committed to their fight against relegation. He also revealed that he has no concerns with Ings' intentions, making light of the 22-year-old's weekend sojourn. "You know the hats and the donkeys you used to get back in the 70s, which my folks used to bring back and tell me they were fantastic - he brought me one of them, which I thought was a nice gesture,” the Burnley boss told … END_OF_DOCUMENT_TOKEN_TO_BE_REPLACED 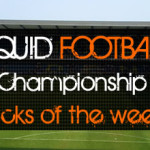 Liquid Football brings this weekend's best picks from the English Championship including a stunning goal from Leeds' Luciano Becchio, a catastrophic error from Tyrone Mears and more. … END_OF_DOCUMENT_TOKEN_TO_BE_REPLACED