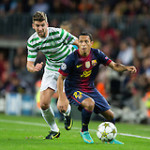 Two years ago, with Guardiola at the helm, Barcelona was on the receiving end of plaudits from the greatest the game has ever seen. They prided themselves in their ability to win the ball back quickly and in doing that continue their possession based game without interruptions. Their backline, consisting of Puyol and Pique at the centre was by far the most feared and arguably the strongest in the world. Puyol's physicality, strength and pace combining with Pique’s tackling technique made their backline the least penetrable. No one had answers and they played a major role in helping the side … END_OF_DOCUMENT_TOKEN_TO_BE_REPLACED