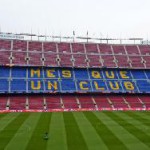 After a board meeting yesterday, Barcelona have announced that they are to stay at their iconic Camp Nou home. There had been speculation that Barcelona would build a new stadium near to the University of Barcelona, but board members voted overwhelmingly to revamp the current stadium instead. The capacity will increase form just under 100,000 to 105,000 and a roof will be built to cover the spectators. The roof will not be retractable, however, and will not cover the pitch. Barcelona is a Mecca for football lovers the world over. Tourists come to Barcelona specifically to see a match at Camp … END_OF_DOCUMENT_TOKEN_TO_BE_REPLACED