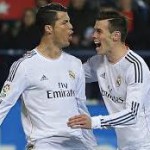 It's been a bad week for Diego Simeone. After a weekend 2-0 defeat by Almeria, his side lost by the same scoreline at home to Real Madrid. Bettors at sportsbook sites such as Sportsbettingonline.ag no doubt would have had this Copa del Rey tie down as a Los Galacticos win but next to no one would have predicted  for them to destroy their fierce rivals in the manner that they did. Real's 2-0 victory gave them a 5-0 aggregate win over their city rivals, in the Copa Del Rey semi-finals. Barcelona are expected to progress from tonight's semi-final, to set up a mouth-watering final. Both Real goals … END_OF_DOCUMENT_TOKEN_TO_BE_REPLACED