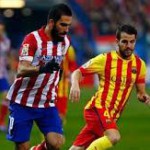 It was stalemate at the Vicente Calderon last night as co-leaders Atletico and Barcelona fought out a nil-nil draw in front of a vociferous crowd. Some nil nil draws can be boring fare but this had excitement and flair, it was like a game of chess being played out by grandmasters Diego Simeone and Tata Martino. Barcelona boss Martino surprised many pundits, myself included, by leaving both Neymar and the back from injury Messi on the bench. This news seemed to galvanise Atletico and it was they who took the game to Barca in the early stages. Atleti's Turkish winger Arda was pulling the … END_OF_DOCUMENT_TOKEN_TO_BE_REPLACED 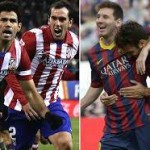 Tonight sees the most hotly anticipated game of the La Liga season so far – El Clasico has been knocked, temporarily, off its perch as the eyes of Spain and the footballing world turn to Atletico Madrid v Barcelona. Barca and Atleti sit on top of the La Liga table this morning, five points in front of Real Madrid. They have identical records: both sides have an identical record having won 16, drawn 1 and lost 1 of their games so far. Barcelona are on top thanks to a slightly superior goal difference but that could all change tonight as they travel to the Vicente Calderon. Barcelona are in … END_OF_DOCUMENT_TOKEN_TO_BE_REPLACED