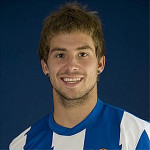 For years now, football fans across the globe have reminisced about David Beckham's debut season in the Premier League and that infamous goal he scored from the half way line against Wimbledon. It seems Spain after all these years now finally have their own answer to the long-range heroics of David Beckham in the form of novice Real Sociedad defender Inigo Martinez, who has already netted two stunning long-range goals from the half way line this season against both Athletic Bilbao and Real Betis respectively. … END_OF_DOCUMENT_TOKEN_TO_BE_REPLACED