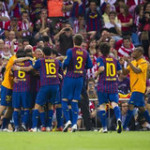 The draw for the latter rounds of the Copa del Rey was made today, setting up a potential semi-final between Barcelona and Real Madrid. Last year the two clubs met at the same stage with Barcelona progressing 4-3 on aggregate and the year before that the two met in the final. To find a season where the top two Spanish clubs didn't meet in the domestic cup you have to go back to the season before (09/10) when neither team made the final and Madrid were wiped away 4-1 on aggregate by third-tier Alcorcon. … END_OF_DOCUMENT_TOKEN_TO_BE_REPLACED