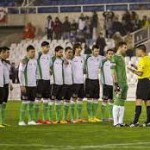 Racing Santander have been banned from next season's Copa Del Rey, after their protest saw last night's quarter final abandoned. Racing were the lowest placed team left in the competition, but their story wasn't to have a happy ending. Racing are a club in financial turmoil. As recently as 2008 they were La Liga big hitters, fighting for a European spot. It's been a tale of mismanagement, on and off the pitch, since then. They now languish in the third tier of Spanish football. The Santander players and staff haven't been paid in seven months. Last night,with the spotlight on their big match … END_OF_DOCUMENT_TOKEN_TO_BE_REPLACED