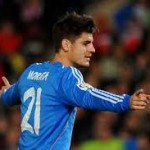 Were it not for the intense speculation regarding Carlo Ancelotti’s position at the helm of Real Madrid (speculation which as everyone knows is common at the Bernabeu), more might have been made of Alvaro Morata’s performances for Juventus over the two legs of the Champions League Semi Final. … END_OF_DOCUMENT_TOKEN_TO_BE_REPLACED