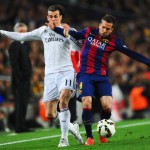 Sevilla CF became the first club to benefit from UEFA’s recent change of regulations which meant that winners of the Europa League from the 2014/2015 season would automatically qualify for the Champions League. This means going into next season, Spain will have a record 5 clubs competing in club football’s elite competition: Barcelona, Real Madrid, Atletico Madrid, Valencia and of course Sevilla themselves. … END_OF_DOCUMENT_TOKEN_TO_BE_REPLACED

Synonymous with the beloved name of Barcelona around the world, Lionel Messi has set the benchmark over the years for what has been the most successful period in the Catalonia club’s history. Yet, the most obvious question is still queried daily among the followers of Europe’s most prestigious of clubs, how would Barca fare without their superstar ‘false 9’? The re-occurrence of another hamstring injury has resulted in Messi not being available for Barcelona for up to 2 months. Not only is the hamstring injury becoming associated with Messi more frequently, the fact that it ceases to let up … END_OF_DOCUMENT_TOKEN_TO_BE_REPLACED