Despite many suggesting the Real Madrid hierarchy have been a little unsettled of late with Los Blancos trailing arch rivals Barcelona by sixteen points at the half way stage in the league, head coach Zinedine Zidane confirmed to press last night after his sides 2-2 Copa Del Rey draw that he has signed a contract extension until 2020.

“It’s signed, I’m enjoying what I do every day, because that’s the way it is. I can’t imagine myself as a coach in two, three years, because things are not like that. I know how it goes, nothing more, even with this contract it does not change anything.”  Source – firstpost.com

The announcement came after Zindane fielded a weakened side in his team’s second leg tie against Segunda side Numancia after having won the first leg 3-0 which sees Real progress to the quarter final 5-2 on aggregate.

However, Zidane’s words make it quite clear that this is likely to be his last contract with the club and acknowledges that he remains under pressure to improve his sides current fourth position.

Zindane started his management of Real Madrid much like his playing career, quickly and successfully.

After securing eight out of a possible ten trophies culminating in that La Liga/Champions League double last season, the Frenchman has seen his side slip away on a domestic front this campaign and many wondered if club president Florentino Pérez would show the world cup winner the door. 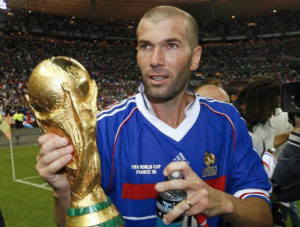 However, the signing of the contract is a statement of intent and trust from both parties as Perez is well aware that Zidane is a serial winner.

Now the season is back underway, the Frenchman will surely have his work cut out. The league title may well look like a lost cause, but there is still the Champions League and Copa Del Rey which Zidane will surely turn his attention and he has just won the FIFA Club World Cup for a second time.

With their main rivals Barcelona strengthening their ranks with the acquisition of Phillipe Coutinho from Liverpool for an eye watering £142 million, the pressure will only get heavier from here as Zidane looks to find a way to rekindle last year’s magic.