The unthinkable almost became a reality on October 10, 2017, when just 40 seconds into the World Cup qualifier between Ecuador and Argentina in Quito, Romario Ibarra fired the home side into the lead. For the first time since 1970, the Argentine national team was facing the genuine prospect of failing to qualify for the World Cup finals. The footballing pride of an entire nation was at stake, and the pressure was on.

The 2018 World Cup was looking like it might not feature arguably the best player on the planet, but of course, Lionel Messi had other ideas about that. Captaining his side and leading by example with every touch, and every ounce of his mastery with the ball, La Albiceleste had their saviour. Messi produced an amazing virtuoso performance, almost single-handedly turning the game around with a superb hat-trick, booking his national team their trip to Russia.

“We made life complicated for ourselves and it wasn’t easy to play here. There was a fear that we might not qualify,” Messi admitted after the game. “I don’t know how I’d have reacted if that had happened,” he concluded. Despite a host of stellar names in their side, Argentina struggled throughout South American qualification, although Messi was always the standout player in a team that performed greatly beneath the constantly high expectations. 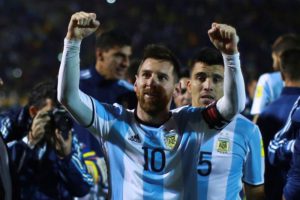 However, irrespective of the difficulties earning their place amongst the 32 teams who will compete at the 2018 FIFA World Cup in Russia, international football betting has Argentina amongst the favourites to lift the trophy at 9/1 odds; whilst Messi is also tipped at 9/1 odds as the favourite to be the top goalscorer at the tournament, just ahead of his former FC Barcelona teammate Neymar.

There’s absolutely no doubt that if Argentina are to emerge victorious in Russia, they will need the very best displays from their magical maestro. Back at the 1986 World Cup in Mexico, it was the phenomenal displays of Diego Maradona leading the team to glory, and to this day, some still believe that he remains the greatest player ever to grace a football pitch. One man doesn’t make a team, has often been a phrase bandied around in football; but Maradona was the exception to that idea.

This remains the shadow of expectation that is always cast over the figure of Messi. Until the FC Barcelona star achieves the same feat, despite all his remarkable accomplishments and records in European club football, the biggest prize in football still eludes him. In some quarters of Argentina, Messi won’t be considered the best ever until, like Maradona, he lifts the World Cup trophy. 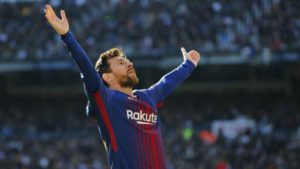 Nevertheless, as we enter 2018 gripped with World Cup fever, the form of Messi couldn’t be any better. His spectacular performances have helped FC Barcelona remain at the summit of La Liga since the start of the 2017-18 campaign. Any doubts about the Catalan side after Neymar’s departure have long since been silenced, with Messi demonstrating his habitual consistency and quality where it counts.

Demonstrating some of the best form of his illustrious career, Messi finished 2017 with 15 La Liga goals in 17 games and six assists, and according to whoscored.com statistical figures, the highest individual match ratings of any player in the competition; including four perfect 10 performances. He also started 2018 with a bang, making his 400th La Liga appearance and adding more goals to his collection, as FC Barcelona defeated Levante UD.

While statistics can, of course, be viewed any number of ways, they do give a strong indication that in this kind of exceptional form, 2018 could finally be the year he gets to lift the World Cup trophy. In the hearts and minds of many Argentines, only then will Messi truly overtake Maradona as their greatest ever player.