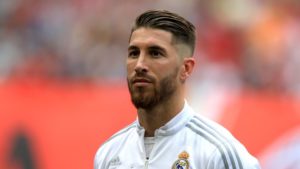 Sergio Ramos may be best known for being a tough, uncompromising yet skilful defender, however, this season he is proving his credentials as a top goal scorer.

In La Liga alone, Ramos has notched seven goals, that tally has put a number of high profile strikers to shame including the likes of Manchester United’s Wayne Rooney, Leicester City’s Jamie Vardy and even Juventus’s Mario Mandzukic who have all scored the same or less than Ramos.

A defender who scores goals is a valuable commodity and Ramos has always been prolific in front of goal by defender’s standards.

However, it is not just the amount of goals the 30-year-old has scored but the importance of those goals. Scoring the fourth in a four-nil hammering may still count the same in the scoring charts but there is an importance to a goal that defines value to a team.

Goals don’t come much more important than when facing your arch rivals and back in December, as the clock ticked over the 90-minute mark, Real Madrid found themselves trailing Barcelona by 1 goal to nil.

Ramos popped up with nearly the last kick of the game to send the Madrid fans into raptures and maintain Real’s unbeaten record at the time. Neutral fans who bet on the draw using the latest la liga betting offers also would have been particularly ecstatic to see the Spaniard’s shot hit the back of the Barca net.

As if that was not important enough, seven days later he hit a 92nd minute winner against Deportivo La Coruna which is now looking like a critical three points as La Liga heads into its final third.

But wait there is more, earlier on in the season he secured a point for his side in the 1-1 draw with Villarreal, scored both in a 2-1 win over Malaga and scored another late winner against Real Betis last time out.

All in all, Ramos’s goal scoring exploits have won his side eleven points this season and that is before you consider how many times he has prevented the opposition from scoring.

Six out of his seven goals have either secured victory or prevented defeat with only his strike against Osasuna in a 5-2 drubbing paling into insignificance.

Ramos has proved he is a huge asset to Real Madrid over the years and at just 30, has many more years at the top.

Ronald Koeman is the highest scoring defender of all time with 253 goals and although Ramos is a long way from that, right now he is one of the best goal threats in world football.