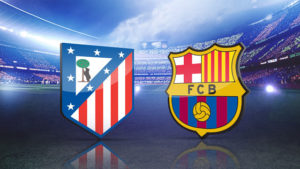 Take a look at the schedule for La Liga Week 24 and you will quickly notice there’s a big match in the line-up. Yes, it is a match between Barcelona and Atletico Madrid. The two teams have been locked in a rivalry for years and the upcoming match will be a particularly good one for a number of reasons.

For starters, the past matches between Barca and Atletico have always been interesting. We’re going to take a look at the history between the two teams in a second. Another reason why a match between the two titans is interesting is because both teams have shown consistently good performances throughout this season. So, who will come out on top this time?

We can’t talk about the rivalry between Barcelona and Atletico Madrid without talking about Copa del Ray. The two have battled each other several times already, each with different results. In the first quarter-final game, Barcelona won against Atletico Madrid after scoring one goal and maintaining a strong defensive line.

In the second game, however, Barcelona nearly lost the match, but managed to held Atletico back with a final score of 2-3. It was a very close game which showed just how competitive the two teams really are. They have relatively equal strengths and are very familiar with each other’s weaknesses.

You only need to see the odds from top bookmakers such as Bet At Home by thebookiesoffers.co.uk to know that the two teams are competing very closely. At the moment, Barcelona is in 2nd place with 14 wins, while Atletico Madrid is currently in 4th with only 12 victories. There are only 6 points between the two, so Atletico will surely really want to secure a victory in the upcoming match; that’s an extra motivation Barca should anticipate.

There’s another reason why Atletico will be particularly motivated going into the upcoming match. The last time the two teams met in a league match, the match ended in a draw with both teams scoring 1 goal each. Despite the current La Liga standings, the two teams are closer to each other in strengths than many experts anticipated.

The historic date is already set. Barcelona will fight Atletico Madrid on February 26th, just days from now. Barcelona still has the upper hand based on the two teams’ past meetups, with Barcelona winning 4 out of the 7 matches; that’s a very close gap indeed, which means there is a big chance that Atletico may turn things around and balance things out with this next La Liga match.

Despite the history between the two teams, the upcoming match is already creating excitement among fans and sports punters. It is one of the highly anticipated matches of the season. Fans are making predictions and supporting their teams, while punters are seeing the close gap between the two teams and just how competitive they are as signs of a great betting opportunity.

La Liga doesn’t get any better than this. Which team do you think will come out on top? Will Atletico use the opportunity to settle the score with Barcelona once again? Be sure to leave your thoughts in the comments section below. We’d really love to hear what you think.