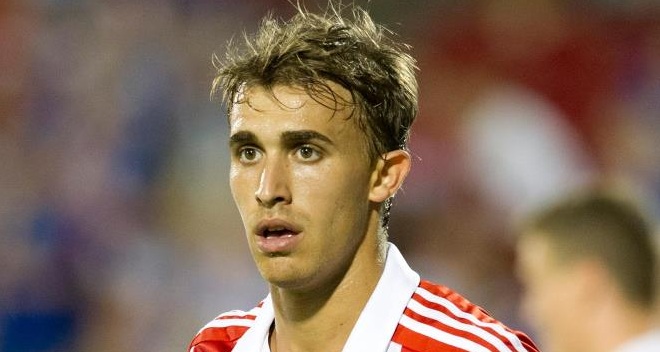 Stoke City defender Marc Muniesa has gone on to admit that he is looking to make a move to Real Betis during the upcoming January transfer window.

Marc Muniesa has been a relative success since joining Stoke City from Barcelona during the summer of 2013 but the defender has had playing time hard to come by during the current campaign.

Although he did score during Stoke’s 2-0 victory over Burnley on the weekend, Muniesa has played only three times in the Premier League this season and it is clear to see that the 24-year-old is not an automatic first choice for manager Mark Hughes.

As a result, there has been speculation that Muniesa could be leaving the Britannia Stadium during the January transfer window and the defender has gone on to confirm the same by admitting that he is keen on returning to Spain by joining La Liga outfit Real Betis.

“We spoke to Miguel Torrecilla (Betis sporting director) in August, but Stoke didn’t want to let me leave then. I like the idea of going to Betis. I’ve watched all of their games since then,” Muniesa told Correo de Andalucia via Football Espana.

“I’m from Lloret de Mar and in my people there are many betícos friends who tell me about the club, tell me to sign for Betis. It has always attracted me a lot, I’ve already played there with Barça B some years ago and I was delighted with the stadium and the people.

“I’ve said it a few days ago in an interview, my intention is to leave, what happens is that now I’m playing and I’ve also scored a goal, I’m in good form.”

Stoke City are currently plagued with injury problems in the defensive positions as the likes of Phil Bardsley, Geoff Cameron and Ryan Shawcross are all ruled out and it will be interesting to see if the Potters allow Muniesa to leave this winter.