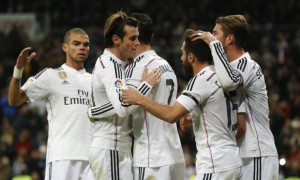 Real Madrid look to continue their grip at the helm of La Liga this weekend as they welcome Deportivo La Coruna to the Santiago Bernabéu Stadium on Saturday night.

Deportivo come into the match after a stunning 5-1 win over Real Sociedad on Monday night, which must have come as a shock to even the most avid Deportivo fan as up until that match, Gaizka Garitano’s side were slumped in the relegation zone and looking ahead to a long season.

However, the win comes as a relief to all concerned with the club after lifting Deportivo up to sixteenth in the league, with the ability to stream La Liga matches on Bet365, it will be interesting to keep an eye on them to see if they can continue to build on that result as the season progresses.

Unfortunately for Deportivo, the fixtures do not get any easier as they travel to a rampant Real Madrid who under Zinedine Zidane’s stewardship are in pole position to win their first La Liga title since 2012.

Deportivo will not be relishing their trip to the capital after suffering a 5-0 defeat the last time they set foot in the Bernabeu in January.

Since then they suffered a 2-0 loss in the reverse league fixture at their home ground the Riazor. In fact, the last time Deportivo even so much as picked up a point was during the 2010/11 season when they played out a 0-0 draw.

That said it is not all doom and gloom for Deportivo, in 2008, they defeated Real twice, winning both games at home, 1-0 in March and 2-1 at the beginning of the 08/09 season in August.

Zidane is still without star man Gareth Bale who looks unlikely to return until at least April but more positive news is that left Fabio Coentrao is back in training after suffering a thigh injury.

Deportivo head coach Gaizka Garitano has Bruno Vilela Gama side-lined for the game with a hamstring strain with Borja Valle Balonga and Laureano Sanabria Ruiz in a race against time to be fit for Saturday.

Real face a big game in the Champions League on Wednesday as they face Borussia Dortmund needing a win to top the group, and that could work in Deportivo’s favour.

But only in keeping the score down, Real are simply too good and should be able to overcome Deportivo even if a few names are rested.

A comfortable 2-0 win for Real looks a steady prediction here with top of table assured for the Christmas period.