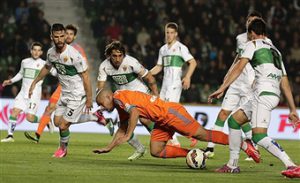 It is safe to say that the last 12 months have not gone to plan for one of Spain’s biggest clubs. Since the beginning of last season, Valencia have won a combined 11 league games out of 41, losing 19 in the process.

So far this season they have lost all three opening games and sit just above bottom club Celta Vigo only on goal difference.

A disappointing opening home loss to high flying Las Palmas preceded a 1-0 away loss to Eibar and last time out they were pipped at home by Real Betis 2-3 leaving Valencia pointless and facing extreme pressure from fans and board alike. The betting odds certainly don’t work in their favour neither, with the live sportsbook lines currently at around 10/1 for Los Che to suffer relegation this season.

For a club that has 6 La Liga titles, 7 Copa del Rey’s, 1 Uefa Cup and 2 x times Champions League runners up, the last 12 months are proving to be a worry and finding signs of improvement is proving tough.

Pako Ayestarán is the man at the helm charged with turning around Valencia’s rather lacklustre fortunes, but 7 losses in his first 11 games has left the Spaniard under pressure to deliver quickly.

Football (and sport in general) is largely about confidence and right now Valencia’s is rock bottom.

But could we be about to see a change in fortune?

Sunday’s game against Athletic Bilbao could be such a chance to turn the tide. Although Valencia will have to travel the San Mamés stadium, Bilbao in the Basque Country, Athletic have themselves not had the start they were hoping for.

One win and two defeats leaves them in the clutches of Valencia this early in the season and Valencia will be looking for revenge after Athletic did the double over them in the league last season AND knocked them out of the Europa League.

However, Valencia were on course for their first point of the season against Betis despite being 2-0 down at one point until a Ruben Castro strike 2 minutes into injury time claimed all three points for Betis.

Despite the loss what was impressive for Valencia is the fact that they fought back to 2-2 even though they were reduced to ten men early in the second half and it is that kind of fight that will give Valencia belief heading into the weekend.

There is no doubt Valencia are a giant of a club and although they have been napping for a while, it is perhaps now they are about to wake from their slumber and catch Bilbao off guard.

This could well prove to be the match of the weekend.